So ride day finally arrived last Sunday – 13th June. The culmination of 6 months of preparation, a few thousand solitary miles on the bike – mainly commuting but a few hundred clocked up on my fortnightly “training” rides and about 100 miles with friends had brought be to this day. Logs had been kept of mileage and food intake (although the latter tapered off around 2 months ago) in a vain effort to focus my efforts and establish patterns for feeding. Various different energy drinks/bars/gels where tested to see which ones actually had the desired effect. All this was done so on Sunday 13th June I could see if I was capable of riding my bike further then I have ever done before and quite possibly the furthest I ever will do in a single day (at least for the next 5-10 years!)

The weekend actually started on the Friday as I made my initial preparations for the trip. Making sure I had all “my” bits that I needed such as cycling kit, food etc. I left all the other bits, rather un-fairly, to my lovely wife. We dropped the kids off at my parents house around midday on Saturday and then made our way off for the 2 1/2 hour trip to the Travelodge in Newbury, about 4 miles from the start of the ride.

We arrived and had a meal at the Little Chef next door, having got there at “just” the wrong time we couldn’t quite check into our room! Still we where both starving as it was approaching 3pm and neither of us had eaten! By the time we’d finished we where all clear to check in so that we did and found out which room we’d been assigned. The hotel felt rather claustrophobic compared to the Ibis I’m used to up in Chesterfield (the only other hotel I use as it’s the one I get booked into whenever I’m on a work’s training course!) but the room was rather nice. We overlooked a lovely forest with a massive Christmas tree in it! Unfortunately it did appear to be a bit of a mobile (or at least Virgin) signal blackhole so my plans of using my new fangled Android phone to access the tinternets was somewhat laboured as I had to keep moving phone & laptop around room to find a decent signal! Still it was a bit nostalgic as it took me back to the early 90’s when I only had 56K dial-up!

Once we’d both had a cup of tea I started looking for somewhere to eat. From past experience I knew that chicken and pasta seem to work for me so a quick Google of Harvester gave us a rough idea where to head. As it was a a) a bit early for us to eat and b) only an hour or 2 after our late lunch we weren’t in a hurry so drove off in the rough direction of Newbury Racecourse and the Harvester to have a look around. I registered and collected my jersey and race number. We then went back out and spend some time and money at the Torq tent. Very friendly couple on there and plenty of samples. I came away with some more energy gels and a 1.5KG tub of the Natural energy powder. A flavourless energy supplement that I could use to make up drinks (with my own flavour added) or add to food to increase the calorie content – 3 scoops was apparently worth a whole bowl of pasta!!

We then managed to kill some more time and spend some extra money at the amusingly named countryside store called Scats where we found a rather short D-Lock (about 4-6″) which was just perfect for locking my pride and joy down in the car to the luggage hook anchor points!

We ended up dining at The Swan as the supposed Harvester turned out to be a Toby Carvery. The Swan looked very nice on our initial drive past and it was by a little canal/river which looked lovely. I managed to balls up the order after agreeing what we’d have with the wife not-less then 5 minutes previous. Thankfully it wasn’t a grand balls up and she could actually eat a few things from the sharing platter!

I got my fix of pasta and plenty of chicken and even had a few bits to take away for post-ride food. A quick stop at a new Tesco store on the way back to the hotel meant we could get important provisions (mainly Tetley t-bags and some porridge oats!) Once we got in I had a bath (just!) and then had an early night, ready for my early start the next day!!

Up at 6am ready for my “breakfast” I was thankful we’d got the porridge in. In all honesty I think my kids may have been left wanting after the breakfast I got from Travelodge! Still I managed to mix up a warm wallpaper paste porridge (with some of the Torq powder in!) before heading down at around 7am to retrieve the bike from the car, check tyres and affix saddle bag and ride number. It was raining which is hardly ideal sportive weather and the one thing I’d been dreading as I didn’t fancy a few wet descents!

By a small stroke of luck I’d managed to book into a hotel that was actually mostly uphill from Newbury racecourse! This meant the 4 mile ride to the start could be nice and causal. I arrived feeling nicely refreshed and found my friends without many issues.

As we joined the now rather large queue to get started we spotted another couple of familiar faces who beckoned us forward. I think the initial group of 3 suspected we wouldn’t keep up with these 2 but it would be worth a crack and besides we did get a bit of a jump in the queue for a legitimate reason! As we edged closer to the start line I could feel my nerves kicking in……..I’ve never done anything like this before and what sane person willingly signs themselves up to ride 127 miles around the English countryside and a few dozen towns taking in some of southern England’s finest hills in the process? Well I guess it’s now or never as the horn sounds and we roll out……..

(At this point I’ll end this blog post as I’m aware I have a tendency to ramble! This should hopefully mean it’s not to long!! I’ll  do the actual ride report in a second post)

Sometimes everything just seems to click and I think I’m having one of those weeks!

It all really started last Friday when I got a surprise phone call from the mobile operator (Virgin Media) to see how I was doing with my current phone/price plan. As it happens I was having a few issues – mainly that the phone I got from them had started playing around at about 13 month old 😦 I consequently was using an older handset to tide me over until I was due my upgrade.

Turns out they could do me a “special” deal but as it transpired the phone I wanted to out of stock – silly me wanting the current popular phone! No fear tho stocks are expected back Monday and a callback was agreed.

Come Sunday and I’d decided that as a final “big ride” before the Main Event the following Sunday I’d try and complete one of my personal goals – a ride to a office I work at in Woking, the only office that I haven’t ridden to on during my normal commutes! I had a fairly straightforward route planned that basically got me to my current furthest out cycle-commute worksite in Thames Ditton and then carried on down that main road until it finished at which point I turned right onto another road that I was familiar with from my previous job-role as a field engineer! This again was a nice straight along route that meet up with my usual drive-in route for the office.

My estimations where 26ish miles which I reckoned I’d knock out in about 1 1/2 hours. I counted off the “landmarks” as I headed out. First my usual ones then I got onto the new roads. The new roads actually turned out to be great fun and I wish I had roads like that on my commute more regularly! Not to potholed, but as it was an A-road not that many stop/starts and enough undulations to keep it interesting! I passed over the A3 and M25 during the route (I get a perverse sense of satisfaction by crossing major roads!) and even got treated to a bevy of classic cars due to a show that was taking place down in Woking which pleased the petrol head side of me 🙂 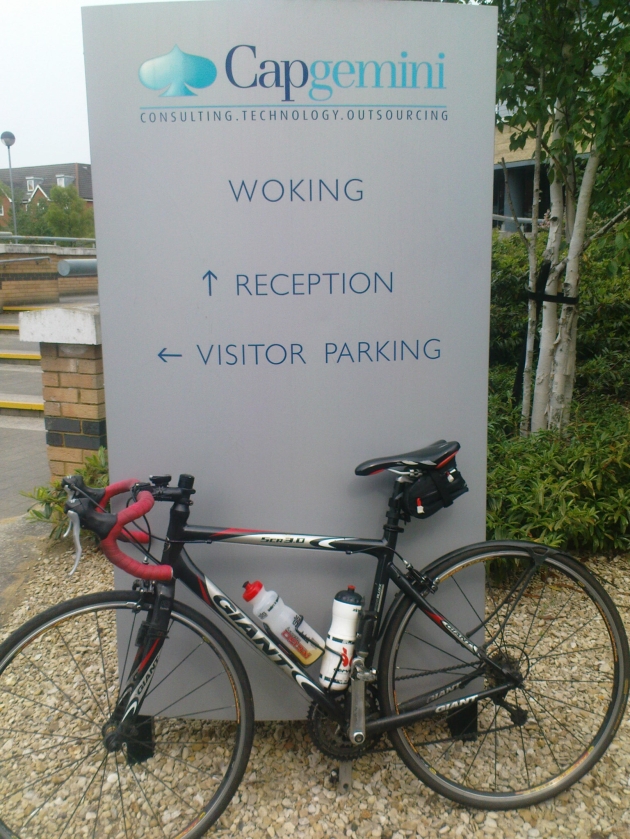 I finally did it

Well there’s the obligatory pic I took to prove my feat! I checked the time when I arrived and me estimation was pretty much spot on for the door-to-door 🙂

The ride back was even more fun as I set a new PB for an average speed for a single journey – 20mph over 26.5 miles and also the whole day with 19mph for the 52 mile round trip!

Once home I gave the bike a proper good clean in preparation for the Magnificat on Sunday! The rear Crud Roadracer was removed and I swear my bike will be about 500g lighter with all the shite I washed off it! The chain is now sparkling silver again and has a nice coat of oil on 🙂

This brings me onto the week! I got the call from Virgin as expected on Monday morning and after a few brief exchanges of words I’d agreed to a new 2 year contract and was told my HTC Desire would be sent out via UPS and due to arrive Tuesday 🙂

As a bit of a surprise Tuesday went fairly quickly at the office and the traffic was kind to me meaning I got home nice and quickly to start tinkering with my new toy and I love it! Had a small scare initially as after I did a phone software update upon rebooting the HTC Sense app kept crashing 😦 This being the main GUI for the phone it meant it was looking like a fancy paperweight, however thanks to a bit of Google-Fu I found a solution which was to basically do a reset – something I was anticipating but had to find the correct procedure!

So it’s now Thursday and my last day working this week before my long weekend where I’ll hopefully crack a few more cycling goals……..